The mobile unit is a towed vehicle featuring the Action Sport Physio colors, in which can be found all the necessary equipment for massage therapy and sports therapy, taping, ice, heat and certain physiotherapy equipment - so that we may offer on-the-spot first aid care. 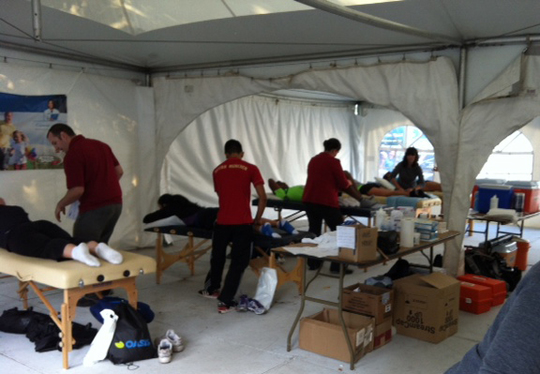 Efficient first aid care is necessary for all types of sports events, otherwise untreated injuries could lead to major complications. Only certified sports therapists, physiotherapists who are members of the OPPQ and licensed massaged therapists such as the ones found at Action Sport Physio are qualified to dispense these treatments.

Since 1987, the physiotherapists and certified athletic therapists from Action Sport Physio have acquired an excellent reputation at the national level. Always keeping abreast of the latest developments in sports medicine, Action Sport Physio has been involved with both amateur and professional sports teams and served as the official sports medicine center for several teams and organizations.

These are some of the organizations and teams we have been associated with in the last few years:

In addition to the above, we have assisted in the following important national and international events :

Our involvement in all these world-class sporting events is living proof of our expertise in sports medicine that is unique in Montreal.

This service is available at these Action Sport Physio clinics: